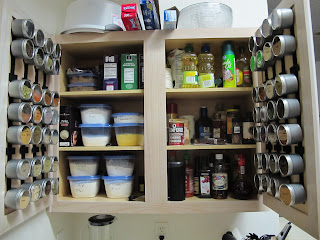 I like collecting spices. My mother has a limited mishmash of spices and blends, and it's frustrating when you're working on a recipe, and you go to look for a particular spice only to find - darn it! - you didn't have it, leaving you to either go off the rails and try a substitution that may completely change the flavor of the dish, or omit it all together, which also may completely change the flavor of the dish. Once I got a place of my own, I decided to always be prepared, and maintain a spice collection that may seem large in comparison to others.

While I like spices, I really don't like spice racks. They trade functionality for flash, and take up valuable counter space, especially when you need a lot of them. You also have to think about future expansion - will I be able to find another one of these ornate racks when I run out of space in my current model. And lest we forget how fast a spice's potency can deteriorate when exposed to direct sunlight. 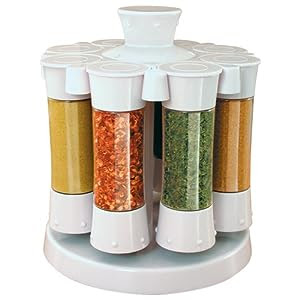 This was my first spice rack, the KitchenArt Spice Carousel, which I chose because my mother had three of them lying around and it didn't cost me anything. It was neat to have the ability to stack more than one rack, and the bottoms rotated to give you an instant 1/4 tsp dose. They were a little hard to clean, though, the design was a bit bland, and every time I wanted a new one, I had to spend $25 on one on Amazon - which is still cheap in spice rack terms (though, in retrospect, not as more expensive than I originally thought). At my max, I had five carousels, and was procrastinating on buying the sixth. The KitchenArt got the jobs done well enough, so I couldn't really justify looking into other spice solutions until my recent move, when I was attempting to clean the containers by soaking them in soapy water. The container previously containing tumeric still had enough residue to dye the plastic of every other container a yellowish tint. Into the garbage they went, and I needed something new to do with my spices. 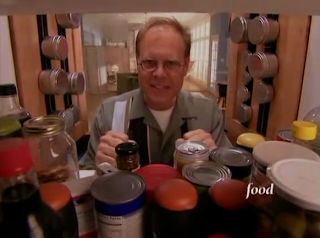 The Solution
As I typically do for kitchen advice, I turn to Alton Brown and the spice rack he uses on Good Eats, which is to say, not a rack at all but tin jars attached to Velcro strips on the inside of the cupboard doors. Certainly an elegant solution, but it seemed like the process would be a little more complicated than I was willing to get into. Even other people that have shared their experiences online often go with a different but similar solution:


Magnets, How Do They Work?
People seem more inclined to use magnetic-based solutions. It seems easier - get the tins, slap a magnet on the bottom, and attach. The only problem is the attaching surface, which either has to be the fridge or a piece of metal that's somehow attached to another surface, like that cupboard door. Looking for the easiest option, I initially went with a magnetic option, too.

Equipment
They already make magnetic spice tins. Problem is, they cost $3 f'n dollars apiece at Bed, Bath, and Beyond, and online resources weren't producing much better results. This was much too high for the 50-60 tins I required for my rack. I instead chose to buy my own tins online for $.75 per unit and put my own dang magnets on there.

I wasn't sure where to find adhesive magnets, so I ended up in the crafts section of Wal-Mart, where I found a roll of magnetic tape that was about an inch wide. It was easy enough to cut a piece the circumference of the tin, and it stuck to the fridge easily enough, but there was a problem: the magnetic tape raised the tin up about a quarter of an inch. If the tin was tilted in either of the directions that didn't have the tape on it, all magnetic connection to the fridge was lost and the tin would fall, bringing any other tins that may be perched beneath them along for the ride. I couldn't trust this approach, especially when cramming sixty tins onto the side of a fridge meant that I had to be careful when removing and replacing tins. This won't do.

Wal-Mart also had magnet sheets for pictures, with adhesive on one side and a magnet on the other. It was flatter, not raising the tins as high off the fridge, and I used an Exacto knife to cut the full surface area of the tin, so there's 100% coverage. Unfortunately, even the magnet wasn't strong enough, once again causing a tidal wave of tins to fall to my kitchen floor, and I still had the overcrowded fridge issue.

Velcro Again
Fine, I'll use the stupid Velcro and risk damage to the inside of my cupboards from the Velcro adhesive. I went to Home Depot and found a roll of Velcro Sticky Back - the one with the picture of the very thing I'm trying to do on the box. It was a simple thing then to measure out some strips and slap them on the cupboard.

The good thing about the Velcro is that placements can be more imprecise - as long as a reasonable amount of the Velcro connected, the thing will stick. Also, the inside of the cabinet allows me a little more room. A couple of weeks in, and it's working pretty well. The entire thing cost about $65, it doesn't use counter space, and by keeping the spices in the dark, it maintains the longevity of the spices. This Alton Brown guy knows a thing or two. 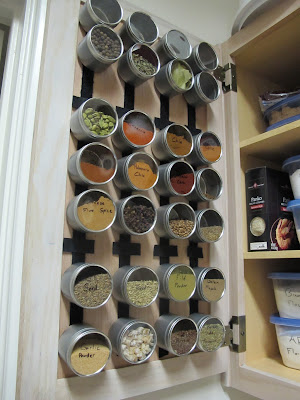 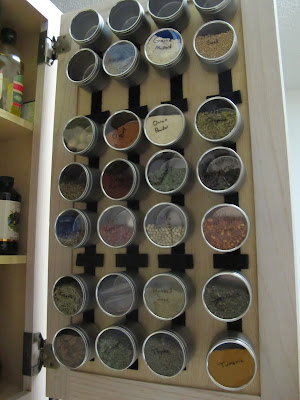 Email ThisBlogThis!Share to TwitterShare to FacebookShare to Pinterest
Labels: Food

This is a great solution, and I'm bookmarking this idea for when I have a little bit more cabinet space to do something similar.

I and many others have used that very solution when I've wanted to velcro musical equipment together (a pedal to the top of a keyboard, for example), without ruining the finish on the keyboard. The gaffer tape holds strong, but when you're done it'll peel off without leaving residue or pulling off finish.

I like the Velcro. Your magnets just weren't strong enough - you have to use neodymium magnet. Very small ones can hold 6 pounds. Love that look and they are out of the way off the counter. AND love Alton Brown.

I love this idea and want to try it. How is holding up?
What are the horizontal black strips? Velcro? Tape?

i Like Your Blog Very Much..I see Daily Your Blog ,is A Very Useful For me.